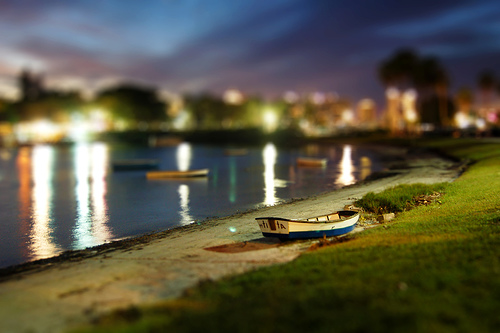 By admin on Art

It is a modern pet peeve that the artistically inclined love to fret about. If you are a musician, you can’t stand the fact that children these days sit before their Macs to play around with GarageBand and they call themselves musicians. Why, if you are that way inclined, you could arguably have a hard time accepting that a young man with wild hair and a screaming electric guitar next to a stack of Marshall amps is a musician too. Take photography; if you have a taste for cameras and photography, then the magazine Popular Photography is probably on your monthly subscription list and you usually look forward to their Reader’s Photo Contest every year. Actually, it isn’t just the photography enthusiast that’s usually interested in that contest. Regular people out there with a camera and a computer are often able to create stunning and wild creations that you would not believe came out of the mind of a lone everyday person with no equipment, training or funds. I remember an entry in that photography contest about 15 years ago that just blew everyone away. It was a large unsupported phantom faucet mysteriously floating in the air against a beautiful blue sky, that was pouring torrents of crystal water. People couldn’t stop wondering at the marvels of digital photo manipulation.

That was before Photoshop became popular. Now, it looks like almost all the pictures in that photography contest, like any other, have had a little of Photoshopping done (if not a lot), and everyone is up in arms at how the ancient and august art form that photography is, is being subverted, by any punk with a computer. To see a perfect touched-up woman in a wedding dress walking up the aisle, the folds of her gown just picture-perfect, her smile maybe a little too radiant, the lighting catching behind her veil to form a kind of halo and little flowers tumbling down her train in just a precious way – all of this is wonderful to see on a photograph only because setting things up this way, and having the skill to time your picture perfectly, with the right lighting, all in an instant, requires artistry and training of the most extreme nature. But if you could just take your average photograph, move in the lighting on Maya, redraw the smile to be more angelic and radiant on Photoshop, change the angle of the shot and the whole background and put in extra sheen on another program, it doesn’t really say much for your ability with a camera.

The only reason a picture like this is remarkable enough that it would win a photography contest is that people imagine that it requires photographic skill. The picture itself is nothing that great. The skill to capture it all in one frame, is what wins the admiration. So is it fair to cry foul here? Not so fast, the Photoshoppers say. If you run your own photography contest how would you put this down in the rules, what is to be considered photography, and what is not? For instance, long before anyone ever had a computer, any photo shot would require that you used a bunch of lights and reflectors to get your picture to shine and stand out. And then your darkroom techniques would make that even better. You choose a camera that could focus on the foreground and blur out the background in a way that really never happens in reality. Or you spent hours getting your subjects, “your actors” set up just so. That was the low-tech way, and today we have a high-tech way. What makes it unfair now?

It’s not just a photography contest that you would have trouble defining specific rules in. Defining where a line lies, is always difficult. Perhaps the best way to go about it would be to just move all the high-tech stuff to its own contest.